We have a strong expertise on human cellular models (this includes the immortalization facility that we have initiated) – and xenotransplantation (this includes several immunodeficient mouse models and grafting procedures).

Themes currently developed in parallel and in synergy

Platform for the immortalisation of human cells and collaboration

Platform for the immortalisation of human cells

Our team has demonstrated some important differences between man and mouse, in the regulation of the proliferation of myogenic precursors. We have chosen to work on human precursors, either in vitro or in vivo, in xenograft models that we have developed in successive European networks. Therefore, in collaboration with W. Wright, we have developed an approach for the immortalisation of human muscle precursors that allows them to retain their ability to differentiate: this has enabled the generation of immortal cell lines derived from patient cells. 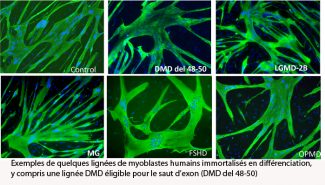 This activity, developed with the full support of the AFM as well as the Dutch Duchenne Parent Project NL (DPP-NL) and the Jain Foundation, has resulted in the creation of a platform for the immortalisation of human cells.

This platform has generated over 85 different cell lines, from controls or pathological subjects. Over 20 different pathologies have been immortalised, some with several different mutations.

These cell lines are shared in collaboration with many international teams, either to study physiological or pathophysiological mechanisms, or to test innovative therapeutic approaches. Some of these cell lines have been shared with the pharmaceutical industry.

Another specific aspect of our team is the development of international collaborations. In addition to numerous collaborations established over many years, we have set up an International Associated Laboratory between INSERM and Sorbonne University for France and FIOCRUZ and the Federal University of Rio de Janeiro for Brazil.

The IAL has already been renewed once, has resulted in 14 publications and a common patent, as well as the exchange of three long-term post-docs, 5 jointly supervised PhDs and many short term exchanges, including visiting professorships in both countries. A common training component (masters and / or doctoral program) is being developed and will involve innovative Biotherapies in the muscle environment.

Figure legend: Human myoblasts in the damaged muscle of an immunodeficient mouse, identified by species-specific antibodies