The project: create a reference centre for neuromuscular diseases

Since the early 80s, the leaders of the AFM-Telethon set themselves the objective of transmitting to future generations a reference centre gathering at the heart of the Public Hospital, specialised consultations, basic and clinical research teams and education on muscle and its pathologies. To achieve this project, the AFM-Telethon launched the first Telethon in 1987 and engaged successful partnerships.

With support from the AFM-Telethon in 1990, the Public Assistance – Paris Hospitals (Assistance publique -Hôpitaux de Paris – AP-HP), installed a multidisciplinary consultation dedicated to neuromuscular diseases in the Risler Pavilion at the Pitié Salpêtrière.

Official opening of the Institute of Myology

Inaugurated in 1996 within the Pitié Salpêtrière Hospital, the Institute of Myology opened its doors in 1997. Its objective: coordinate, around the patient, the medical care, basic research, applied research, clinical research and teaching.

Besides consultation, teaching started with the first myology lesson given by Pr. Michel Fardeau, as a beginning to the Neuromuscular Pathology university degree (1996); concerning research, the INSERM U153 research unit moved to the Institute of Myology. In 1998, the Institute created the first Summer School of Myology, intended to teach myology to students and doctors from around the world. This first edition brought together 34 participants from 22 nationalities. At the same time, a documentation centre opened to answer questions from the public, patients, patients’ families, students … In 1999, the U153 research unit changed its name and director and became U523, led by Ketty Schwartz.

In 2000, myology acquired a new dimension with the completion of the first gene therapy trial in Duchenne muscular dystrophy, partly carried out at the Institute. In parallel, the AFM-Telethon organised the 1st International Congress of Myology, which gathered nearly 1,000 experts, scientists and doctors. Thereafter followed the opening of genetic consultation in 2001, the neuromuscular histopathology laboratory in the Risler Pavilion and the INSERM U582 research unit led by Pascale Guicheney in 2003, which took over from the U523 research unit. 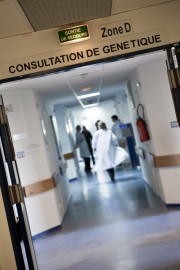 In 2004, the peripheral nerve diseases consultation was inaugurated and the Institute obtained the label “Neuromuscular Pathology Reference Centre”. In 2005, the Myology Group UMR787 research unit led by David Sassoon opened and the Myology Institute Association was created.
In 2006, Thomas Voit became Scientific and Medical Director of the Institute of Myology, which acquired the latest generation imager, a 3 Teslas magnet. The U582 research unit closed in 2008 and the U974 research unit, headed by Thomas Voit was inaugurated in 2009.

On January 1st 2014, two research units merged to form a new structure: the Myology Research Centre, the first research centre dedicated to this discipline, which has thus acquired recognition in the scientific field.

Read more
Necessary Always Enabled
Necessary cookies are absolutely essential for the website to function properly. These cookies ensure basic functionalities and security features of the website, anonymously.
Functional
Functional cookies help to perform certain functionalities like sharing the content of the website on social media platforms, collect feedbacks, and other third-party features.
Performance
Performance cookies are used to understand and analyze the key performance indexes of the website which helps in delivering a better user experience for the visitors.
Analytics
Analytical cookies are used to understand how visitors interact with the website. These cookies help provide information on metrics the number of visitors, bounce rate, traffic source, etc.
Advertisement
Advertisement cookies are used to provide visitors with relevant ads and marketing campaigns. These cookies track visitors across websites and collect information to provide customized ads.
Others
Other uncategorized cookies are those that are being analyzed and have not been classified into a category as yet.
Save & Accept