What is the purpose of the exon 31 in the modelling of clathrin structures in muscle cells? – Interview with S. Vassilopoulos 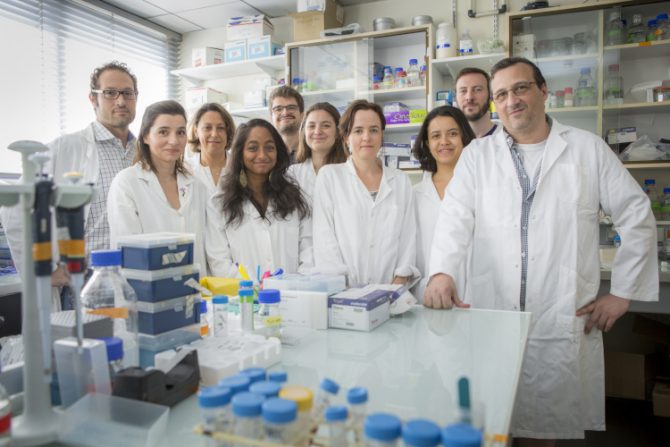 Interview with Stéphane Vassilopoulos, researcher at the Muscle Organization & Therapy of Dominant Centronuclear Myopathy laboratory in Team 2 at the Institute of Myology Research Centre, headed by Marc Bitoun. He and his group are interested in the muscle cell membrane proteins, and more particularly in clathrin and its involvement in myopathies and just published an article on the modelling of clathrin structures in muscle cells*.

What are the origins/overall context of this project?
This study is a follow-up to the many research projects that have been conducted for around 10 years at the Institute of Myology’s laboratory, to understand the involvement of the dynamin 2 protein in its interaction with clathrin and the role of the latter in muscle cells.
Unexpectedly, clathrin, which forms vesicles in most types of cell, including in neurons, forms plaques in muscle cells and plays a structural role in the adherence of muscle cells to the extracellular environment.
Gilles Moulay, a postdoctoral researcher in the group, showed, in collaboration with the Denis Furling team, that the proteins forming these clathrin plaques are subject to significant alternative splicing in muscle cells and faults in these pathways are involved in the pathophysiology of a number of different myopathies.

What are the objectives of this study?
The objectives of this research work are to better understand muscle physiology and to understand the pathophysiology of myotonic dystrophy type 1 (Steinert disease, DM1) and of centronuclear myopathy (CNM), which is caused by dynamin 2 mutations, in order to find therapeutic avenues.
In DM1, a significant splicing defect has been noted in these proteins, which can mean that the transitions between the endocytosis vesicles and the plaques are not correctly formed. Therefore, it is necessary to resort to genetic reorganisation and exon skipping. 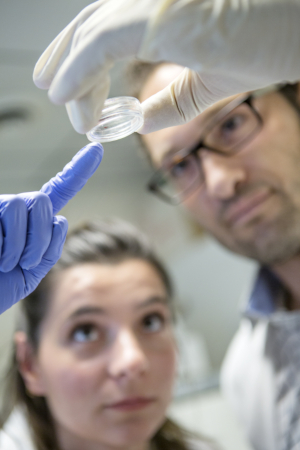 Which methods and protocols were used?
We developed an electron microscopy technique that allows us to visualise the cell’s internal surface proteins.
This procedure consists of breaking open the cell using ultrasound, then creating a surface replica with platinum grains in order to be able to observe it with the electron microscope. And so, thanks to the nanometre resolution, it is possible to observe the structures formed by the proteins in their entirety.

What results have been obtained?
The uniqueness of our technique is combining this electronic microscopy technology with another genetic technology called exon skipping. This technique makes it possible to delete the segment of the gene (exon 31) causing a problem, in order to perform the analysis without this exon. One can then recreate the clathrin protein in such a way that the cell only forms vesicles and not plaques, which has a visible impact on the muscle. Cell function is impaired by this, resulting in muscle function deficiency.

What conclusions can be drawn and what benefits has it been possible to measure for these patients?
The next steps will involve using sequences that force exon inclusion. The idea is to combine several constructions together to correct several genes and to act on clathrin dysfunction in the muscle.
We want to use combinations of vectors for therapeutic purposes, in order to resolve other splicing problems discovered in the cells of patients with myopathies, and to improve muscle function.